So, our sweet pea is from Guangzhou. Many parts of Ch**a are more remote country side, etc. But, our little girl is from GZ. And this sort of feels a lot like New York City. So, our first Gotcha Day was pretty low key. We ordered room service and ate in the hotel. Travis held Meili until she was asleep and she slept through the night in her crib. She woke up once around 11:30 pm. She went back to sleep after being held for awhile.

Travis and I were both pretty tired, too. So, we all went to bed early. It was so surreal to have walked through the day we had been praying and dreaming about. We still are so grateful for all the prayers and support. We couldn't believe how many people were setting alarms and online in the middle of the night praying for us.

Thank you. It is very crazy to finally be going through the motions, and trying to absorb as much as possible. And it is sort of as if you kick into auto-pilot. So, our prayers, are just "Here we go, Jesus, go before us."

The next morning we had our first breakfast and lots of time just hanging out in the hotel. We wonderered why there was so much "down time" in our schedule the first few days; but just getting ready, trying to navigate what we'll eat, what she needs, playing, facing getting dressed challenges (or rather not getting dressed) is a big deal. So, at 9:30 am, we headed back to the civial affairs office with our group. We were wondered if any of the children would be nervous. But, they were mostly playing together. One at a time, we went into a side office with a gift with us, and we were asked a few questions, with our passports. And we signed a form saying we wanted to adopt her. We promised to never abandon or abuse her and told them why we wanted to adopt her. Then we went upstairs to have our forms notarized and were asked more questions. And left a small gift, etc.
No one really looked at the gifts or smiled; but they were polite. 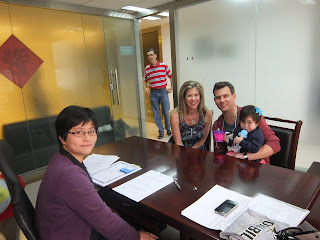 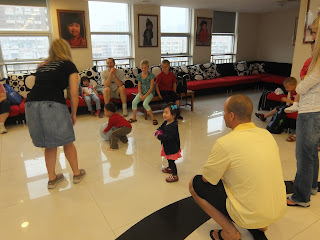 Then our guide ran to the bank for our orphanage "donations". We were given official forms and took a photo with the three of us as the "official" photo. And as far as Ch**a is concerned, she is legally our daughter!

She also was gulping down her water. We found out she could really care less about the formula. But, we sort of keep making it for her. She ate puffs and fruit and bread and noodles constantly for the first 48 hours. We didn't care. We just kept letting her know there is plenty of food. She gets very upset if you try to share a plate.

That night, we started the infatuation with the I Love New York shirt. Once she has a shirt on, she likes to stick with it for awhile. Again, we just go with it. The second morning, we just put her new clothes over her pajama shirt. After breakfast, she was attached to her new shirt, so we could take off the pajama shirt.

We ventured out of the hotel, which seems silly; but again, this feels a bit like New York to us. So, it's busy. Huge buildings and busy streets, and no crosswalks. Also, everyone told me that it's super "casual attire" here. I am assuming the provinces are more casual; but people are dressed in stillettos and even full sequin dresses even at breakfast. It's no wonder MJ is a fashionista. She's from this city.

For friend who will travel here, we walked out the side door of the hotel (passed the elevators and toward the bank) out the back door to the right, through the gates and toward Costa Coffee. Starbucks will be the to the right. There is a little mall there, and at 3F is Belgiannos. It was great Italian. They don't let you  bring your own water. So, we ordered cokes and then a bottle of Evian. They said "It's a big bottle". So funny. We drank the entire bottle between the 3 of us. Travis ordered the lasanga and we ordered saffron risotto and a penne pasta for MJ and I. They had a great sauce that was basically tomatoes with different breads. We were very early, and so, the entire wait staff just stood and stared at us. They really liked Meili Joy. She and I wore bows in our hair.

So, that was our 2nd night! MJ slept mainly through the night. But, was up for about 2 hours. Travis is the baby whisperer. She really likes to be held standing up. She doesn't know how to support herself, so she's completely dead weight. Obviously, I want ot hold her; but this is pretty brutal on my back. But, I also think she thinks he is cozier to sleep on. She definitely doesn't fall asleep without being rocked our held standing up. Travis also stands by the window and for some reason looking out over the city really calms her down. 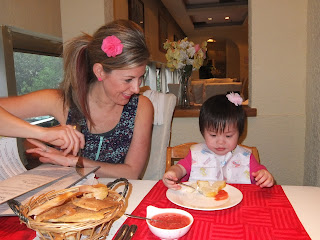 (Again, no editing, etc. Forgive the errors. VPN only works intermittantly. Maybe someone can log in & edit for me!)