We are sitting in Guangzhou at the Garden Hotel. We head to the cival affairs office at 2 pm today. I was thinking we'd be bored waiting; but the time to actually settle in and feel organized is really wonderful.

I'll back up and cover some of our basics of our travel. We spent an amazing 20 hours in NYC, and we'll save that post for later. But, headed to JFK airport early Friday evening. We settled into the Admiral Lounge for British Airways. Our donated miles included all of this special status. It was great because we had run around like crazy people in NYC.

We bored the plane around 9:30 pm and waited for about an hour and half to de-ice. The fact that we had even made it to NYC the day before had been our first miracle. Almost all of the flights out of Charleston had been cancelled except Jet Blue. Jet Blue only flies this route for the flight we were on back/forth to NYC. Not gonna lie, the turblanance on landing at JFK was pretty intense. But, I was at peace about it. So, we weren't surprised when we had to sit and wait for de-icing in JFK later. However, we were not concerned about connections because our plane was stopping in Vancouver, and we weren't even leaving the plane.

Having the bonus gift of being in business class was wonderful. Our seats laid down flat. And they came with a duvet style cover and pillow. I had packed a neck pillow and other travel pillow, too. So we had plenty of great neck support. Since it was 11 pm, we were super tired. We started taking our homeopathic No Jetlag meds. And I took some melatonin and Airborne. I think we both slept most of the flight to Vancouver. I woke up every 2 hours or so, and slathered on coconut oil, salin nasal spray, eye drops (had taken my contacts out), and took our No Jetlag pills. I also had cayenne pepper in a  little spray bottle for my feet, etc. I think we took a total of 2-3 doses of airborne the entire trip. We had both been fighting sinus congestion, so I was trying to keep my skin and nose hydrated. I also had a pair of hospital grade compression socks on (thank you, Shar!). My feet started to swell at the beginning; but I kep the cayenee/water mix on them and my hands.

They fed us a dinner after leaving JFK and then again as soon as we took off in Vacouver. I had planned to blog; but I just felt that I needed to sleep and trying to disengage my brain. I was sad that I hadn't done my spotify offline correctly because I was missing some of my music.

Anyhow, the Cathay Pod experience was a huge blessing. I stretched out and did some pilates stretches every couple hours, too. I can not believe that I  flew/sat on an airplane for about 20 hours and walked off without pain. So, very grateful to Jesus for that extra blessing.

At one point, Travis and I ordered soup and cake at about 3 am. That was fun!

We arrived in Hong Kong at 8 am. They served us breakfast about 5:45 am on the plane. We both changes and I put my makeup back on, etc. It was hot when we were in the airport.
We waited for our
shuttle to the Sky City Marriott down in the 28-30 section. We were space cadets and went through Immigration first, and then got our bags and then walked through customs. We didn't even stop at customs. Just walked through the "nothing to declare" area. 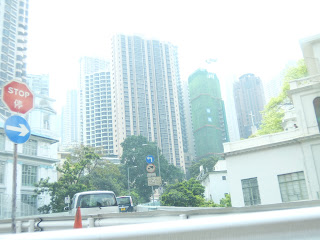 We were greeted by  Angie's mom, Barbara, in the hotel lobby. The bus boys took our bags to our room, and we checked in. Travis ended up going down to eat about an hour later. We decided we would try to take advantage of being in HK. So, we took the hotel shuttle to the main subway station. It was like a classy mall, kind of reminded me of Keystone Mall in Indy. We bought subway tickets with our Hong Kong dollar (divide by 8 for the amount in US dollar). We road the subway line all the way to HK Station. We got off there, and got a taxi to the Tram Station Peak. Then we stood in a very long que for tickets. It was very funny, everyone kept moving in herds closer and closer to the tram. The line was super long; and jetlag was catching up with us at that point. 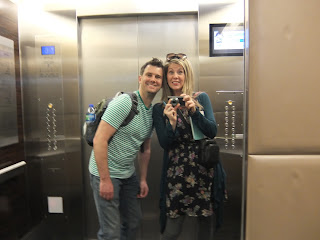 The tram is like a little train car on a rail that goes straight up the mountain. At  the top there is a big mall type area and you can look out over the city. We were so blessed to have a sunny clear day, hardly any of smog. We could see for miles.

We took the same transport back, and then realized we had no idea where the shuttles picked up. But, we made it back in time for dinner with Angie, Cameron and her mom. I had the buffet becuase I hadn't eaten much that day. Cameron ate mini octopus. Seriously! 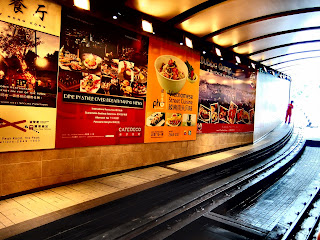 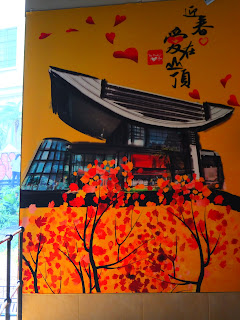 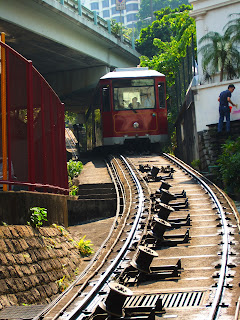 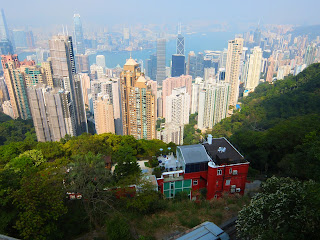 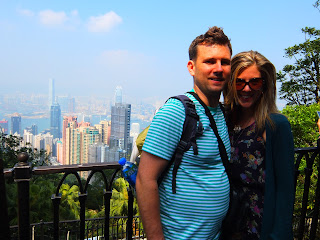 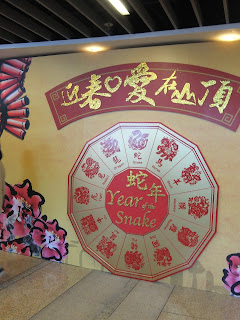 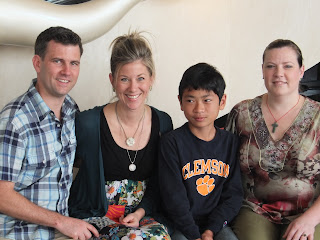 We fell asleep at 7:39 pm. Out cold!
The next morning, we took our time waking up and headed to breakfast. Then we prayed over Angie and her Mom and Cameron and headed upstairs to pack. We took a taxi to the train station. We tried to take lots of pictures for the boys to se, like these double decker buses. So far, our souveniers for them are sighting buses from NYC and HK. 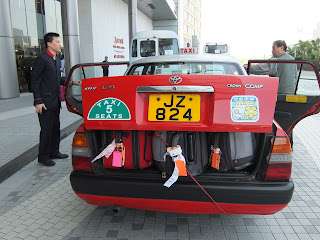 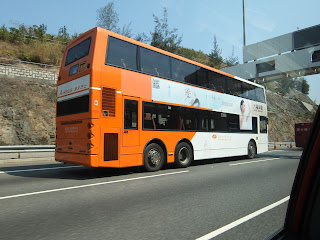