I was a little nervous about going to "temples". I had a little bit of an odd experience in Tokyo, years ago. But, we thought it was important that we go to learn a little more about her culture. It's a big deal to be in her actual city (where she was found). So, we are trying very hard to get a feel for the culture here. Even though it seems like New York to us, it's still very different. Today, it was cooler. Wish I'd worn a jacket to the tour. But, it was more comfortable than the days before.

The ancestral temple was a former special home for worship and school for one of the larger royal fammilies. It's not functional anymore and the government owns it; but the architecture was amazing. No nails in the entire building. The carvings are beatuiful. We bought our tea sets here because they are guaranteed not to have lead in them (Okay, so I bought two sets. I couldn't help it. The cheaper "every day" set was cute; but not as amazing as the smaller more expenseive sets. We bought a fancier set for MJ for her wedding or something special like that). And we had a small tea ceremony with the ladies. It was wonderful.  We also saw these crazy bugs for sale. We bought small little charms for the boys. Hilarious. And we watched them hand paint artwork and the pottery. 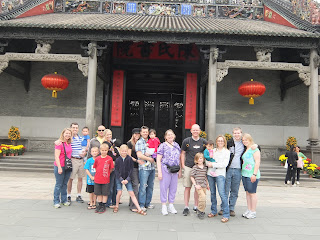 This is most of our group, minus one of the families. Five more families come in on Friday!
Our guide, Rebecca, told us that China is known for some of these specific trades and it is important to preserve the culture by passing down the tradition of these hand made items. It was fun to buy some of these special gifts for Meili Joy here. We also found out that what we were calling "cherry blossoms" are actually Mei Flowers. Um, hello!? Rebecca was so excited that we were naming her Meili. She kept saying "that means beautiful. and it is a Chinese name!" 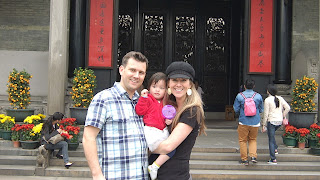 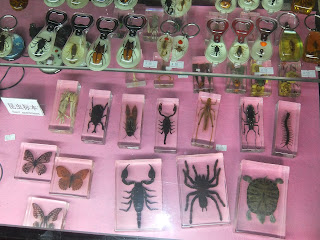 So, after the temple. We came home and she took her first long nap. My head and sinus' are horrible, so I started my zpac. Pretty sure the smog and cigarette smoke is getting to me. Then we decided to try to find a few more restaurants and stores on our own. So, for the families traveling behind us, here are my notes. We tried to find the Banana Leaf restaurant, and we didn't. We found the Saltan Turkish restauarnt though!

So, here we are going out to dinner. I had also bought a dress the day before in one of the boutiques, we figured I better be stylish and also used our "godmother" Aunt Abby money for a special boutique dress with a little petticoat skirt for Meili Joy. So, we have done the high fashion side of GZ now. The ladies in the store said "Oh, I have 'L' for you" meaning Large. And, they come way off their pricies when I showed any interest. It was pretty funny. And that was even in the mall. I am not loving that my flat iron doesn't work well. It's so fancy here, that I'm not loving being all grungy casual. But, that's probably just my vanity!

Soon to travel families:
So, come out of the front of the hotel, walk along the sidewalk, up the weird stairs w/ a ramp in the middle and down the subway stairs. Once down stairs, veer to the right (don't buy a ticket) and follow the Exit B signs, you'll come back up the stairs on the other side of the road. You can't cross the road there unless you do this, or walk to the other side, where the high bridge/cross walk is. I was scared to walk this. I had heard there were some very disturbing sights from disfigured homeless people and other situations. But, we did walk that way back after dinner. It wasn't too bad. We had taken the stroller, and that was hard. We went through the Friendship Store, and managed the floors. Floor 4 has the extra grocery story. Floor 6 is high end children's clothes. Nothing super special. And the mall is insane! Designer everything! 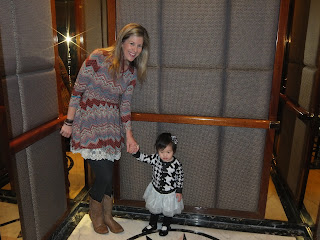 We walked down one of the side streets, and finally saw the Sultan Restuarant (under the Friendship Store to the left of the huge TV screen). It was a turkish restaurant that another adoptive family was coming out of. They said it was good. We ordered the flat bread and the appetizer dip that was yogurt (like tzaziki) and then split a mixed chicken & kabob meal. We also ordered the chick pea salad and the rice pudding and the other pudding and turkish tea for dessert.

She dressed up and put her headband on and all the bright colored hair ties that I had and that Abby had bought for me. 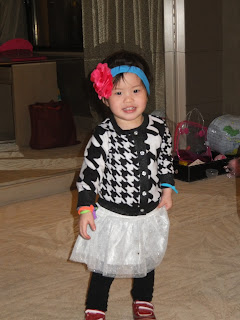 Okay, VPN back up. Hitting "publish". Wish I could load more photos; but they are only letting me load one at a time. I have to go back & hit "upload" and open the camera folder each time and start over. Oh, well! Thanks for praying!
Posted by Jessica at 6:53 AM